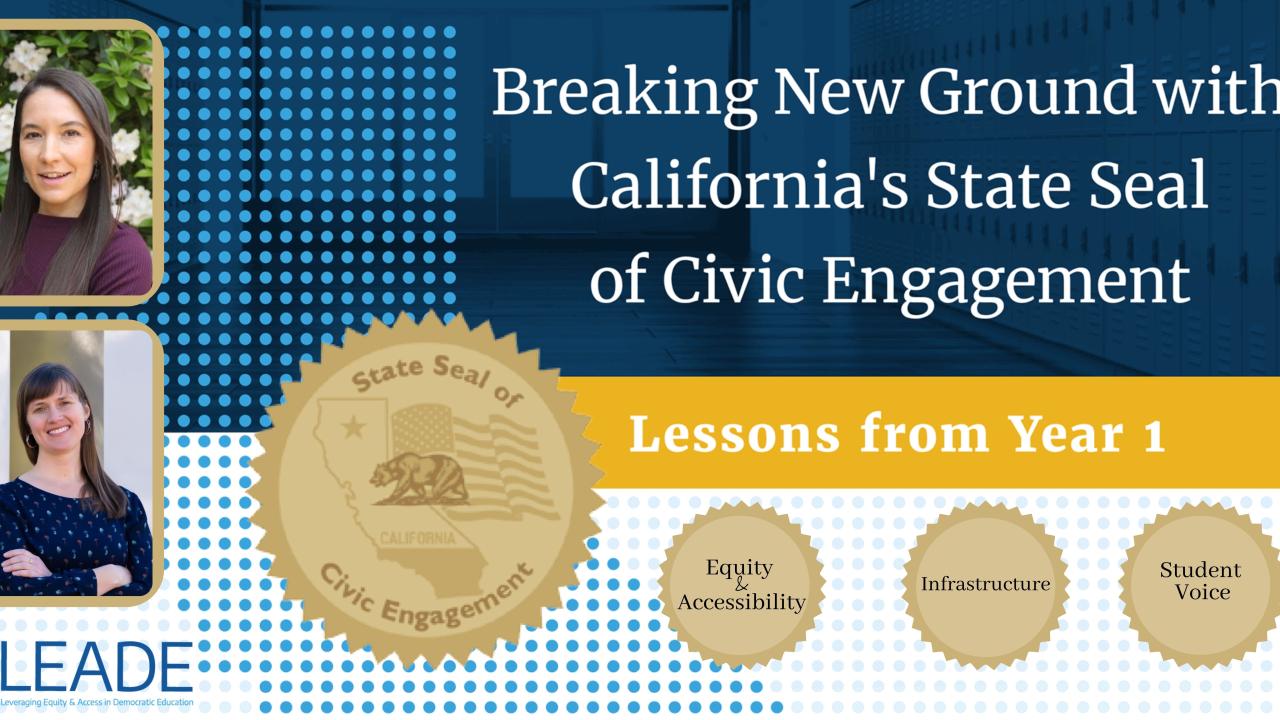 As one of only five states in the nation that offer a high-school diploma seal focused on civic engagement, California has been working to lead the way for students to graduate from high school with a robust civic education.  And researchers have been looking closely at how the California State Seal of Civic Engagement (SSCE) has been rolling out since its initial adoption just over a year ago.  One of the CHSSP’s close partners, Leveraging Equity and Access in a Democratic Education (LEADE), has just released an important report on this very topic.  Entitled Breaking Ground with California’s State Seal of Civic Engagement: Lessons from Year 1, lead authors Erica Hodgin and Leah Bueso provide portraits, insights, and a glimpse into best practices for how the SSCE can be a tool to promote authentic and equitable civic learning for all of California’s students.1

Across the board, supporting civic education and engagement encourages and empowers students to impact their communities, state, and world around them. However, unequal access to civic learning has been found in a range of studies: Black and Latinx students were less likely than their White counterparts to be exposed to civic learning opportunities.2 Meanwhile, high-school students who attend elite schools and students from middle-income families were more likely to participate in valuable extracurricular activities.3   LEADE’s new report draws attention to varied approaches at implementation of the SSCE, yet it finds areas of common ground in successful programs.  Overall, the report noted that student voice, equity and access, and infrastructural support are three key priorities to implement the seal and support student civic learning.

According to LEADE’s report, student involvement is key to the success of implementing the SSCE. Districts can involve students in creating curricula, civic engagement projects, and partnerships with community organizations. Modeling a democratic process could also include recruiting a representative group of students to serve on a SSCE stakeholder committee.

Civic learning opportunities historically have excluded students from lower-income families and underrepresented (especially Black and Latinx) communities. By centering equity from the get-go rather than an afterthought, districts and leaders can help students pursue “civic excellence as a goal for all students, not the top few.” Framing the educational model in this way also allows educators to reexamine whether traditional measures of success are in fact barring students from access to civic education and civic learning opportunities.

From mission statements to staffing, districts and leaders can create cultural change and community change through the SSCE. High-quality civic engagement education and learning opportunities need a staff and support that is diverse, democratic, and representative of student communities. Partnering with organizations like LEADE and the CHSSP also helps to advance the SSCE in districts.  The SSCE should be integrated into the curriculum alongside other efforts rather than a separate initiative. An earlier LEADE report found that 87% of all districts in the state did not mention civic(s), citizen(s), citizenship, or democracy and 41% were silent on the social purpose of education.”5 Only 29% of districts in the sample had a staff member devoted to history and social sciences.6

The State Seal of Civic Engagement offers a unique opportunity to both democratize the educational process and to center democratic and civic learning in schools. The authors of the report argue that “at the very foundation of public education lies a democratic mission of preparing young people to participate in democracy.”7 Early adopters of the SSCE offer practical examples of how local education administrators might move forward with implementing it. Salinas Union High School District, for example, emphasized democratizing the process by a creating stakeholder committee that included students, teachers, and community members. Meanwhile, Anaheim Union High School District, which has been laying the foundation for the SSCE for five years and this year conferred 1,963 seals, worked with the California Democracy School Initiative to integrate inquiry-to-action projects into their core curriculum. If the aspiration of public education is to provide a civically engaged student, the SSCE provides a clear, equitable, and holistic option to achieve it.

If you are interested in learning more about the State Seal of Civic Engagement, contact Erica Hodgin from LEADE (erica.hodgin@ucr.edu) or Beth Slutsky from the California History-Social Science Project (chssp@ucdavis.edu).