Sites of Encounter in the Medieval World

How Did Sites of Encounter Change the Medieval World? 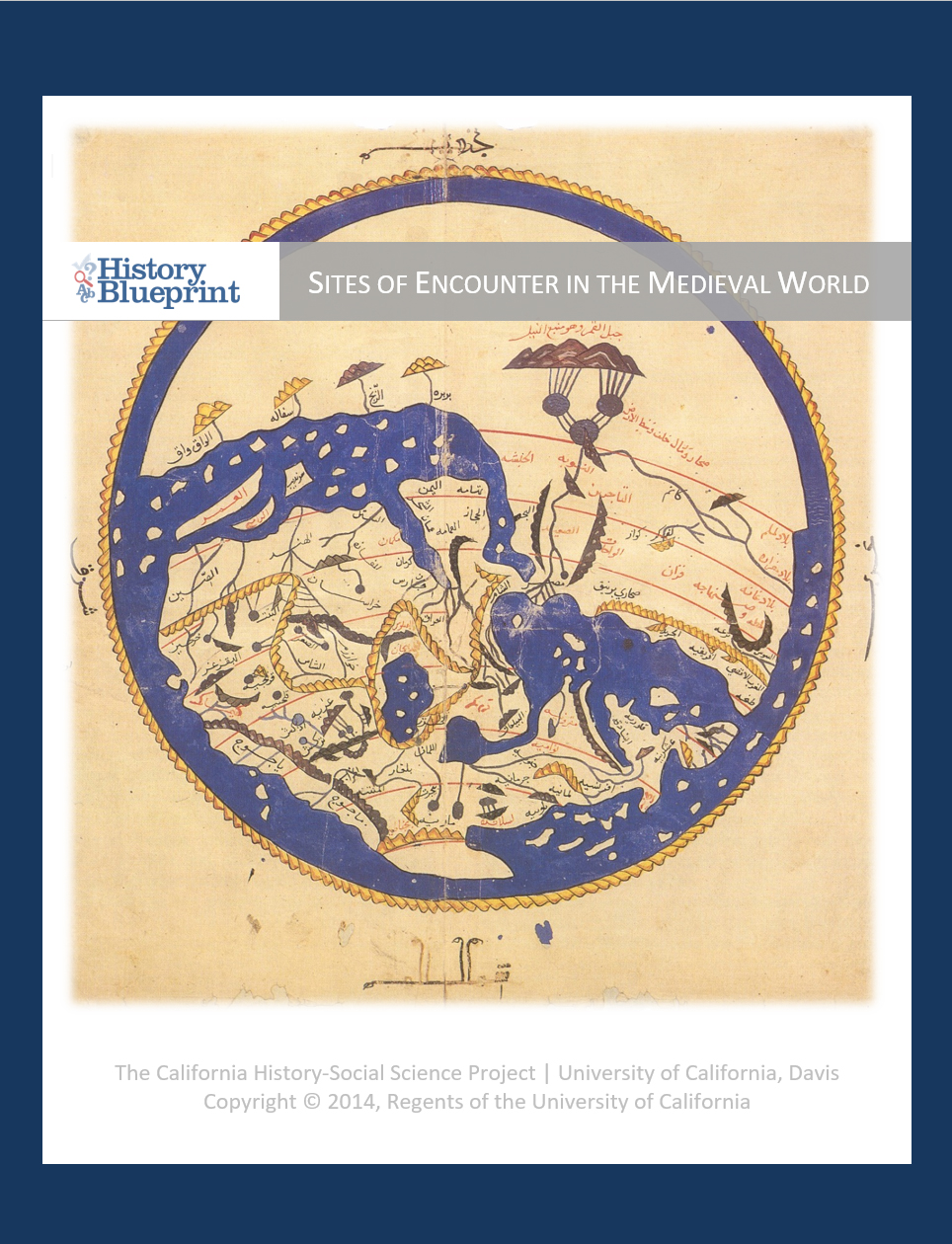 The Sites of Encounter in the Medieval World unit introduces students to the connections between regions and peoples in Afro-Eurasia (the “world”) between 1000 and 1500 (the “medieval” period.)  Following recent world historical scholarship about connections between cultures in and around the Mediterranean, Indian Ocean, and South China Sea, the lessons immerse students in sites of encounter – Sicily, Quanzhou, Cairo, Mali, Majorca, and Calicut - where merchants, travelers, and scholars exchanged products, technologies, and ideas.  These exchanges also sparked new ideas and cultural productions, which then diffused outward from the site of encounter.  Without denying that cultural encounters were often marked by conflict, our approach focuses on the shared norms and practices that made exchanges possible.  To make these abstract ideas more understandable to students, the lessons begin with the study of concrete objects – maps, ships, astrolabes, silks, and spices – exchanged or produced at the sites of encounter.  In the first lesson, Norman Sicily, a major site of exchange between the Muslim and Christian worlds, students will examine the world map al-Idrisi and his team of Muslim, Jewish and Christian mapmakers drew for Christian king Roger II.  For Quanzhou, students will analyze excerpts from the travel narratives of Marco Polo and Ibn Battuta and the technology of the sea-faring junk; for Cairo and Calicut, they will examine descriptions of the cities written by travelers from different cultures, along with local accounts, art and architecture.  Between the major lessons, there are mini-lessons on the Mongol Empire, the voyages of Zheng He, and the Black Death.

This unit also provides detailed instructions to support student analysis of a number of relevant primary sources, including texts written by Ibn Jubayr, Geoffrey Malaterra, Al-Bakri, Al-Umari, James I of Aragon, Benjamin of Tudela, Al-Maqrizi, Ramon Llull, Zhao Rugua, Ibn Battuta, Marco Polo, Ma-Huan; letters from the Cairo Geniza and the Venetian archives; visuals of maps by Al-Idrisi and Cresques Abraham, Ming dynasty porcelain, and silk-making machinery.  Throughout the unit, students focus on an engaging and historically significant question: How did sites of encounter change the Medieval World?

In addition to teaching students about the medieval world, this unit teaches students how to read, write, and think historically, analyze historical evidence from primary and secondary sources, and make interpretations.  Students will practice Common Core reading and writing skills, especially identifying the perspective and point of view of a source, integrating information from visual and written sources, identifying evidence from sources, using that evidence to support an argument or interpretation, and communicating that argument in well-conceived sentence, paragraph, essay, or explanation.  They will also practice geographical skills through interactive map exercises using the World Trade Circles Map, which is based on Janet Abu-Lughod’s interpretation of the 13th-century world system.

Visit Sites of Encounter in the Medieval World Interactive Map

Sites of Encounter in the Medieval World has been funded, in part, through the generous support of the Social Science Research Council and the British Council.

Copyright. All History Blueprint materials are Copyrighted by the Regents of the University of California, Davis Campus.  These materials, however, are designed for K12 educational purposes, and as such, teachers have the right to copy and redistribute the material in any medium or format.  This use is predicated on the assumption that educators will give appropriate credit, provide a link to our site (http://chssp.ucdavis.edu), and indicate if any changes were made.  Educators may do so in any reasonable manner, but not in any way that suggests the University or the California or the California History-Social Science Project endorses said teacher, school, or related organization.  Finally, educators or any members of the public may not apply any legal terms or technological measures that legally restrict others from accessing the materials or doing anything that this agreement permits.