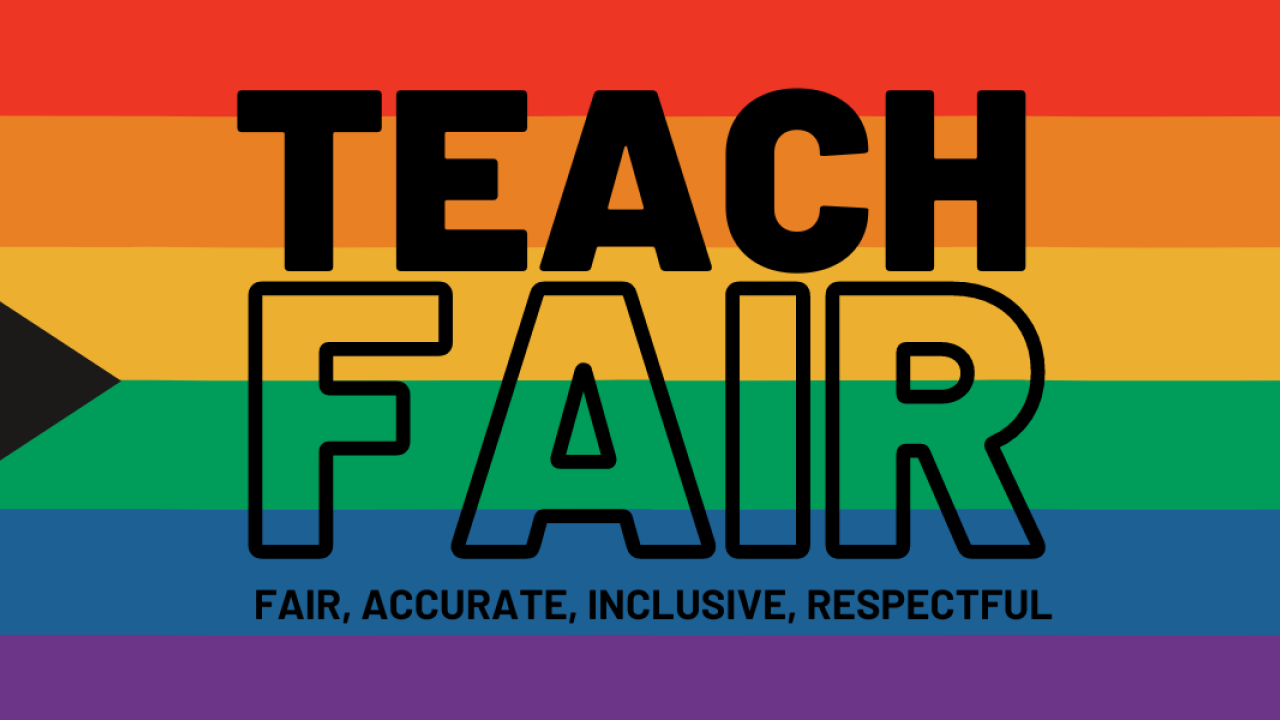 LGBTQ+ people have always existed and will always exist. But they have not always been represented in the history that we teach. Efforts to remedy this have led to the passage of LGBTQ+ inclusive education policies in states such as California, Colorado, New Jersey, Oregon, Illinois, Connecticut, and Nevada. Educators in New York and California have created resource sets to help teachers begin to incorporate queer history into their curriculum.

In the past, modern terms such as lesbian, gay, bisexual, pansexual, asexual, transgender, non-binary were not always in usage. Today, the term “queer” is often used as an umbrella term to describe non-heterosexual and non-cisgender people in the past who, if they were alive today, might identify as members of the LGBTQ+ community. The term “queer” has been used pejoratively in the past because of its association with homophobia, but was reclaimed by queer activists beginning in the 1980s.

Teachers should incorporate queer history into their curriculum by not only teaching about the long history of the marginalization and oppression of LGBTQ+ people but also by teaching about the persistence of LGBTQ+ people and resistance against inequality. Since the passage of California’s FAIR Education Act in 2011 and the creation of a new History/Social Science Framework in 2016, California educators, have already begun to make these important changes to their curriculum.

However, as educators continue to revise and refine their teaching, I believe that it is especially crucial to consider an even more  transformational changes of the curriculum beyond inclusion of the themes of LGBTQ+ marginalization, oppression, resistance, and persistence. I want to encourage teachers to teach the history of queer joy.

Teaching the history of queer joy empowers our students by challenging false narratives that marginalize or dehumanize LGBTQ+ people. This can help counter persistent homophobic and transphobic stereotypes that dismiss LGBTQ+ people as destined to lives of misery and pain. It can be especially empowering for LGBTQ+ students to see examples of people like them in the past who have not just survived, but who have led deeply meaningful and joyful lives.

LGBTQ+ history is full of moments of queer joy, of celebratory events like the famous pride parades that attest to the importance of community. LGBTQ+ history is also full of incredible love stories such as the story of Edie Windsor and Thea Spyer that stand as evidence of the power of queer joy. These examples allow us to teach the full range of the human experience. It reminds us that learning history can be an affirming and empowering experience.

Here are some practical ideas to help teachers integrate LGBTQ+ history (with a focus on queer joy) into their existing curriculum. These examples are primarily for those teaching middle or high school United States history.

When teaching about the American West, teach about the diversity of individuals who lived in and settled the region. Share the stories of people who, if they were alive today might identify as two-spirit, transgender, or non-binary. This could include a discussion of We’wha, a notable Zuni potter and weaver who lived in New Mexico, Mother George, a beloved nurse in Idaho, or Albert Eugene De Forest, a prominent actor in the San Francisco Bay Area. Educators might also share the stories of same-sex couples such as miners Jason Chamberlain and John Chaffee who were known in the California gold country as the wedded couple or the story of Hannah Clapp and Elizabeth Babcock who built a home together in Carson City. These examples demonstrate how queer people in the past were loved and respected within their communities.

An examination of the lives of enslaved and formerly enslaved people in 8th grade history courses provides an opportunity to talk about the wide range of family structures/kinship relationships that Black communities created to survive and thrive in the era of slavery and Reconstruction. This also allows for conversations about queer families through the stories of people like Minty Caden. Caden was in a relationship with another enslaved woman whose surname she adopted as a sign of her love and commitment. When discussing emancipation and reconstruction, examine the strategies that Black families (including queer Black families) developed to find one another and rebuild their lives together.

8th grade and 11th grade history courses introduce students to the variety of domestic arrangements that individuals formed as a result of changes in industrialization and urbanization in the late nineteenth and early twentieth centuries. Define the term “Boston marriages” and explain how these same-sex relationships between women provided alternatives to heterosexual marriage, which was an especially important option for queer women of the era. Discuss the queer history of the suffrage movement and the queer lives of Progressive-era reformers and suffragists such as Jane Addams and Mary Rozet Smith, Lucy Diggs Slowe and Mary Powell Burrill, or Mary S. Malone and Anna Woods Bird.

Students in 11th grade already study the era of the Harlem Renaissance. Diversifying the content around gender and sexuality can help students understand the range of experiences of the individuals in this era. The 1920s and 1930s are also full of examples of celebrations of queer joy especially in the poetry, music, and art of the era. Include examples of the popular drag balls and the Pansy craze. Read the poems of Angelina Weld Grimké. Look at the careers of Julian Eltinge or Gladys Bentley and examine the song lyrics of queer singers such as Ma Rainey and Gene Malin. Discuss how theatrical performers and Hollywood stars pushed the boundaries of the gender and sexual norms of their era and brought queer representation to the stage and screen.

Discussions of World War II would not be complete without inclusion of the contributions of LGBTQ+ people to the war effort. These stories can help complicate and expand our understanding of the experiences of the soldiers and civilians of this era. Talk about the service of people such as Lorraine Hurdle, Vincent Miles, Pat Bond, Robert Fleischer, and José Sarria and the queer community they created in the military. Stories of queer joy abound in this era. Read the letters of Marvyl Doyle and Esther Herbert who met while serving in the Women’s Army Corps during World War II. Share resilient stories of individuals like Jiro Onuma, a Japanese American who met his boyfriend Ronald while he was incarcerated at the Topaz internment camp in Utah.

As your lessons move into the post-world war era, talk about the rich queer community that flourished in mid-twentieth century cities. Connect with the previous units to discuss how thriving queer communities developed in city centers as a result of the effects of urbanization and the development of port cities during World War II. Explore the history of LGBTQ+ nightclubs such as Mona’s or famous drag performers such as José Sarria.

In your 11th grade unit on twentieth century civil rights movements, you definitely want to introduce students to the history of the homophile and gay liberation movements. Go beyond the Stonewall Riots (1969) to explore even earlier examples of queer resistance in California, such as the Cooper’s Do-nuts uprising (1959), the Compton’s Cafeteria riot (1966), and the Black Cat Tavern demonstration  (1967). There are also numerous examples of queer joy as an act of resistance.

When discussing civil rights movements and women’s liberation, share the stories of the various demonstrations of queer joy organized by gay liberation activists. Explain how gay and lesbian couples kissed and hugged to protest policies that prohibited same-sex public displays of affection. Discuss the 1968 flower power demonstration at the Los Angeles police station in response to police raids at The Patch, a gay nightclub. Provide examples of gay kiss-ins such as the “demonstration of affection” at the Gold Rail Tavern in New York City or the protest at The Farm bar in Los Angeles in 1970.  Share the example of the 1973 lesbian kiss-in at the Los Angeles County Art Museum. Explain that the purposes of these demonstrations were not only to protest exclusionary policies that discriminated against gay people but to fight for the freedom of lesbian and gay couples to express their affection in public in the same way that heterosexual couples enjoyed the ability to do so.

The long fight for marriage equality provides ample opportunities to bring in examples of queer joy. From the history of commitment ceremonies to civil unions to federally-recognized marriages, LGBTQ+ people have publicly demonstrated and fought for their right to love equally.

It is important for all of us to learn our history - to know where we come from, to feel a sense of belonging, to understand that we are part of something bigger than ourselves - part of a much longer history.

Join us for the Final Inquiry: Why Now? Sessions