A counterargument is an argument that challenges your thesis.

Why is it important?

Contrary to the notion that it would make your essay weaker (by identifying potential faults that a reader might not
even come up with), it can strengthen your point and be a disarming strategy. It allows you the writer to anticipate doubts
and pre-empt objections that a skeptical reader might have. If done objectively, you can appear more credible for seeming
fair-minded and having thoroughly considered the issue at hand.

1) You turn against your argument to challenge it.
2) You disprove the alternate view with evidence.

How do I come up with a counterargument?

If possible, table the direct opposition position from your thesis.

Your thesis: World War II was a watershed for women.

Counterargument: World War II was not a watershed for women.

Look at the evidence you’ve used and consider whether another potential conclusion is possible.

Women remained in the workforce in the postwar era because of their positive experience in the wartime workforce.

Women remained in the workforce in the postwar era because of rising costs of living and economic necessity.

Ask other students about your topic to determine other commonly held views.

If all else fails and you cannot see beyond your thesis, do a bit of research to determine other popular arguments.

Most importantly, you must provide evidence or support for the counterargument.

Of course, World War II was not a watershed for women because discrimination in hiring and wage disparities persisted and because many women lost their jobs at the war’s end.

How do I write a counterargument?

Signal words: Of course, Admittedly, While, On the other hand, But, Yet, However, etc.. 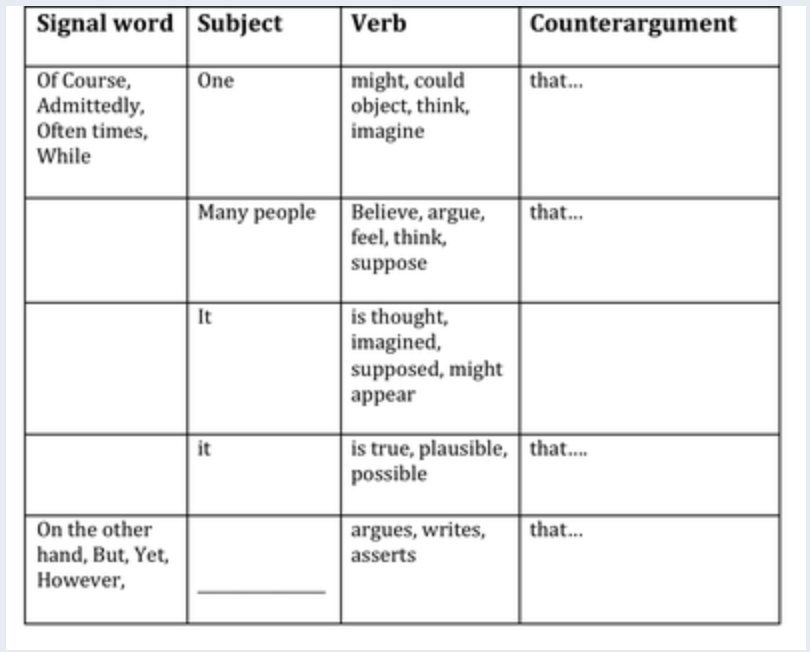 Step 2: The Rebuttal: Reaffirming Your Argument 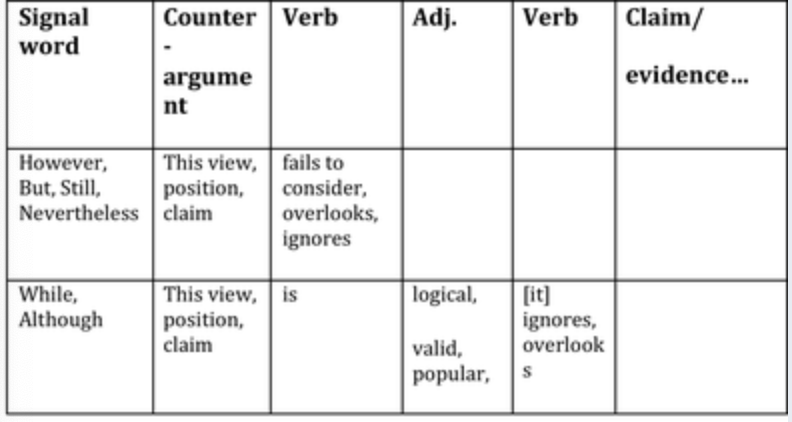 An example of a thesis followed by the counterargument and rebuttal

World War II was a watershed for women. Some might argue that World War II did not transform the workplace for women, because discrimination in hiring and wage disparities persisted and because many women lost their jobs at the war’s end.  Although many younger women did return home and resume domestic responsibilities after the war, statistics show that the number of older, married women actually increased in the workplace in the postwar era. Furthermore, for the women who had returned home after work to bear children, they instructed their daughters to “be anything they wanted.”