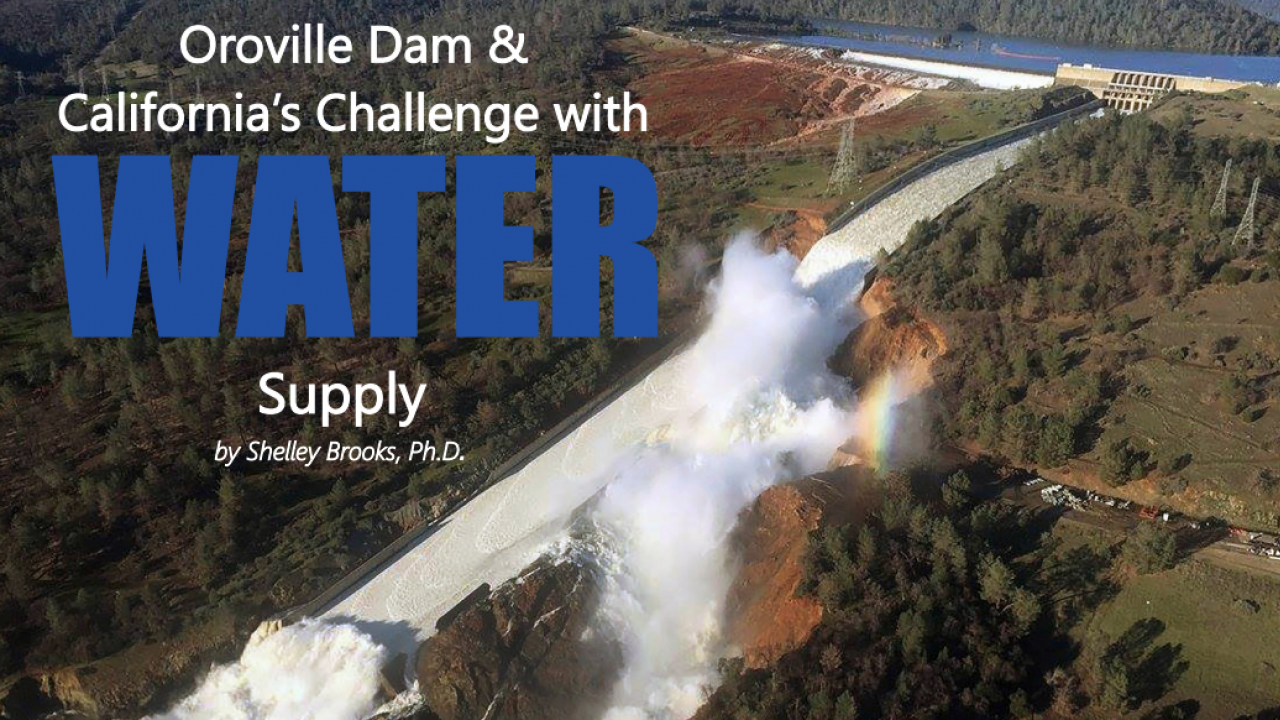 Abstract: At 770 feet high, Oroville is the nation’s tallest dam and in February 2017 it almost failed. Heavy winter rains had caused the lake behind the dam to rise by fifty feet in just a matter of days. When it looked as if the dam might not be able to hold the nearly 3.5 million acre feet of water, approximately 180,000 residents downstream were required to evacuate their homes. Moreover, a rupture in the water system threatened the water supply as far away as southern California. One third of the water consumed in the L.A. area flows through Lake Oroville. Twenty-seven different urban and agricultural water districts throughout the state receive water from Lake Oroville. The threat of dam failure was “potentially catastrophic” according to a state official in the Office of Emergency Services. The state immediately began work on repairing the dam, and managed to prevent the much-feared downstream flooding. An estimated two-years’ worth of work is still to be done to make the Oroville Dam fully functional, at a cost of approximately $275 million. Fortunately, the state believes the dam will be operational in time for this next season of rain. Meanwhile, there are 1,400 other dams throughout the state, the majority of which are at least as old as the Oroville Dam (built in 1968) and constructed with outdated techniques and designed to hold and move water based on averages and data from a different era.

This Current Context provides students with the opportunity to think about the importance of California’s water infrastructure to the state’s success. The timeline connects students to the choices made in the past to manage and direct the flow of water throughout the state. At a deeper level, however, there is the very question of the health of California’s watersheds. The history-social science classroom may not seem at first glance the place to tackle the issue of watersheds, but examining where, when, and to what extent Californians have converted once undeveloped land into homes, agricultural fields, factories, urban areas, and highways is critical to understanding the health of California’s watersheds. A teaching resource developed by the California Department of Conservation includes many helpful slides for the classroom that explain watersheds, how they operate, what benefits they provide, how humans influence them, and suggestions for conservation efforts. See the entire teaching resource here: http://www.conservation.ca.gov/dlrp/wp/Documents/California%20Watersheds.pdf

The map analysis activity on page 6 of the Current Context issue suggests a number of discussion questions to engage students in thinking about the extent to which California’s watersheds have influenced where population and agricultural centers exist throughout the state, and how important watershed management is to sustaining California’s people and industries. Looking all together at the history of water management, watershed science, and today’s water infrastructure conditions will give students a deeper understanding of the state’s most important natural resource.

Finally, for an excellent map for classroom investigation, see the National Geographic map "Water for Life" created for the Education and the Environment Initiative (EEI): http://www.calrecycle.ca.gov/eei/unitdocs/maps/waterforlife.pdf