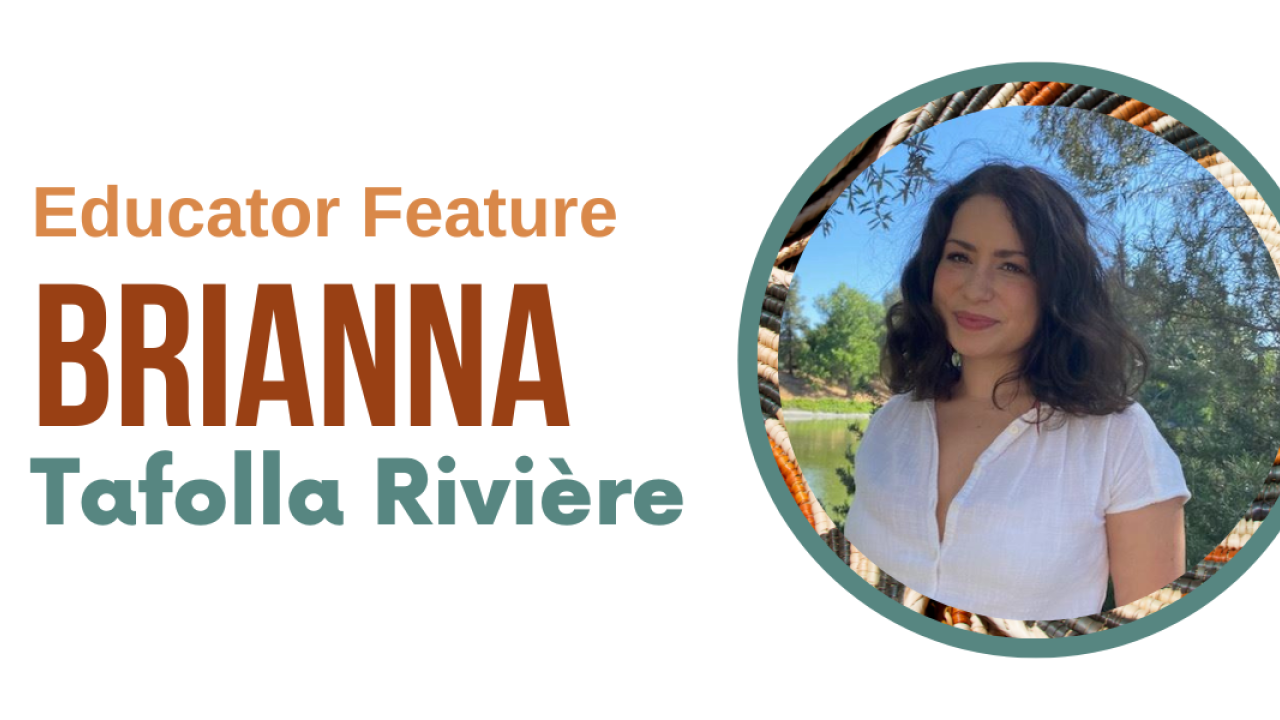 This month, the California History-Social Science Project invited Brianna Tafolla Rivière to write a guest post about bringing indigenous history into your classroom. Brianna is a historian and PhD candidate specializing in Native American History at UC Davis. Her research focuses on the Red Power Movement and activism in Hollywood during the twentieth century. We are grateful that she agreed to share her expertise along with a few resources that have helped her in the classroom. For more lesson plans, primary source sets, and picture books, visit our November Monthly Highlights page.

Happy Indigenous History Month! This month we celebrate the histories of Native American and Alaska Native peoples. Teaching Native American history can be a difficult balancing act for educators. Textbooks and lessons frequently painted Indigenous Peoples as relics of the past driven to extinction by European settlers.  Such narratives risk casting Indigenous Peoples as the victim of Euro-American violence and insufficiently acknowledge the power and agency of individuals, communities, and Nations. Unangax̂ scholar Eve Tuck describes these narratives that only highlight the pain and violence inflicted upon Indigenous communities as “damage-centered.” Eve Tuck asks scholars and educators to avoid narratives that seem to be “intent on portraying our neighborhoods and tribes as defeated and broken.” In this post, I have worked to provide resources to help give as much or more attention to the triumphs and ingenuity of Native peoples throughout U.S. history for every lesson focused on Indigenous land dispossession and genocide. Native American and Alaska Native peoples are neither defeated nor broken. They asserted their agency, resisted elimination, and persist today despite ongoing colonization.

As a Native American Studies scholar, I encourage you to continue to shift away from damaged-centered narratives in your lesson plans and embrace the complicated past and present of Indigenous history. For instance, when preparing for a class, teachers  might ask themselves, “How does this history lesson complicate my (and my students) understanding of Native American history? And more broadly U.S. history?” Below are a few resources that I selected that you might find helpful for highlighting the themes of agency, resistance, and persistence.

Exploring the concept of agency (the ability to make informed choices about one’s present and future) helps complicate damage-centered narratives. Inquiring into agency within Native American and Alaska Native histories recenters  power and independence with Native individuals and communities. Throughout centuries of violent waves of European and later American colonization, Indigenous Peoples often successfully resisted and were powerful players in politics and economies. The edited volume Why You Can’t Teach United States History Without American Indians is full concise examples of Native agency throughout American history, here are some suggested chapters from the book:

It’s important to spend classroom time  to consider and celebrate the many forms Indigenous resistance (the refusal to accept or comply). From the sheer act of continued existence to occupations of federal buildings, Indigenous Peoples have resisted European colonization with both violent and non-violent action. Many Native activists argue that their existence alone is resistance to the American settler-colonial project. Historically, American settlers sought to eliminate Indiginous peoples from the land in order to make room for incoming colonists. This resulted in tragic and genocidal campaigns to exterminate Indigenous peoples  and stamp out their culture in the effort to“kill the Indian and save the man.” Continued existence is an example of successful resistance.

The Red Power movement is an example of modern resistance that became prevalent during the Civil Rights Era of the 1960s. The Red Power Movement sought economic justice, asserted treaty rights and sovereignty, and fought for cultural preservation.  Out of the Red Power Movement came the American Indian Movement (AIM) which lasted from the 1960s until 1978.  In addition to the traditional goals of the Red Power Movement, AIM intensified its critique against police brutality and worked to bring awareness to the Movement with a series of occupations.  One of the most notable demonstrations of resistance was the Occupation of Alcatraz, which lasted over eighteen months, from 1969 to 1971.  The Occupation brought international attention to Indigenous sovereignty and human rights. This month marks the 53nd anniversary of the Alcatraz Occupation, during which 400 Native people–including children and families–reclaimed the land under the Treaty of Fort Laramie with the aim of building a cultural center.

Native Americans and Alaskan Native peoples have persisted (continued onward despite great obstacles and opposition). Despite ongoing efforts to strip them of their culture, communities, and traditions, Indigenous Peoples persist to exist and thrive.

One heroic example of persistence is the life of Zitkála-Šá (also known as Gertrude Bonnin), who lived between 1876 and 1938. Zitkála-Šáwas a Yankton Dakota girl whom missionaries kidnapped and sent to  an Indian boarding school at eight years old. Zitkála-Šá later reflected on her years at the boarding school in her autobiography, The School Days of an Indian Girl. Despite her early education, Zitkála-Šá eventually returned to her community and became an outspoken activist, an accomplished musician, and prolific writer. Zitkála-Šá’s story exemplifies Indigenous persistence and works for students on multiple levels.  Many Indigenous Peoples consider their actions both reflective of their ancestors and future generations, their persistence speaking both to their history and their future.

This month should be full of exciting and fulfilling histories of Native American and Alaskan Native peoples. Enjoy this month and continue to explore and integrate the themes of agency, resistance, and persistence in every month of the year.