Deconstructing Point of View: A Common Core Strategy for Analyzing Allende's Speech to the UN

In a 1972 speech to the United Nations, Salvador Allende, president of Chile, charged that multinational corporations posed a serious challenge to the sovereignty of nation-states. Elected in 1970, the embattled socialist president was dead by 1973, killed in a military coup partially engineered by the CIA. Nixon and his secretary of state Henry Kissinger viewed the Allende regime as completely unacceptable to the US, and the American president ordered the CIA “to prevent Allende from coming to power or to unseat him” in order to “save Chile.” Allende was naturally more popular in the Communist bloc. Fidel Castro advised Allende to mobilize “the Chilean working class” to “decide the fate of Chile.” Fate ended up favoring the anti-Allende forces, and brought the military regime of General Augusto Pinochet and its horrible human rights abuses. 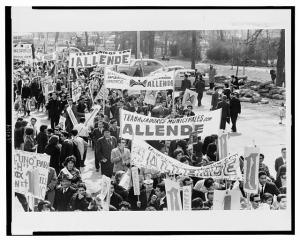 For high school students studying the Cold War, the rise and fall of the Allende regime in Chile offers a good example of a third world nation caught in the pressures of the Cold War. It would not be difficult for students to identify the points of view on each side based on a brief secondary account. The Common Core standards, however, require students to go a step further, into analyzing texts for the structure of an argument, subtle details, allusions and underlying assumptions. Having students read and analyze Allende’s 1972 speech offers an ideal opportunity for students to go beyond the simple binary understanding of point of view. The excerpt teacher leader Adrienne Karyadi selected from the speech emphasizes the pressure put on Chile and other third world countries by multinational corporations, rather than by political organizations such as the CIA. As a socialist, Allende had nationalized the copper mines which were largely owned by American-based multinational corporations, such as Anaconda Copper. Allende identified the chief source of his opposition to be economic, a point that could easily be missed by students. Students have to grasp the connection between multinational corporations and capitalism, and associate the critique of these corporations with Marxism. In addition, they must deal with the economic and political challenges faced by the third world countries.

Here is the excerpt:

“At the third UNCTAD [United Nations Conference on Trade and Development] I was able to discuss the phenomenon of the transnational corporations. I mentioned the great growth in their economic power, political influence and corrupting action. That is the reason for the alarm with which world opinion should react in the face of a reality of this kind. The power of these corporations is so great that it goes beyond all borders. The foreign investments of US companies alone reached US$ 32,000 million. Between 1950 and 1970 they grew at a rate of 10 per cent a year, while that nation’s exports only increased by 5 per cent. They make huge profits and drain off tremendous resources from the developing countries.

In just one year, these firms withdrew profits from the Third World that represented net transfers in their favour of US$ 1,743 million: US$ 1,013 million from Latin America; US$ 280 million from Africa; US$ 376 million from the Far East; and US$ 74 million from the Middle East. Their influence and their radius of action are upsetting the traditional trade practices of technological transfer among states, the transmission of resources among nations and labour relations.

In short, all the world political structure is being undermined. The dealers don’t have a country. The place where they may be does not constitute any kind of link; the only thing they are interested in is where they make profits. This is not something I say; they are Jefferson’s words.

The large transnational firms are prejudicial to the genuine interests of the developing countries and their dominating and uncontrolled action is also carried out in the industrialized countries, where they are based. This has recently been denounced in Europe and in the United States and resulted in a US Senate investigation. The developed nations are just as threatened by this danger as the underdeveloped ones. It is a phenomenon that has already given rise to the growing mobilization of organized workers including the large trade union organizations that exist in the world. Once again the action of the international solidarity of workers must face a common enemy: imperialism.”

Adrienne’s activity has students identify the points of view of both the US and the Soviet Union to the speech:

As they articulate what US and Soviet leaders might have responded to each part of Allende’s speech, students have to grapple with Allende’s points and perspective, and the viewpoints of the superpowers. For the Allendes Speech Activity (and a Key Allende Speech Activity), click here.

The Politics of Supreme Court Nominations